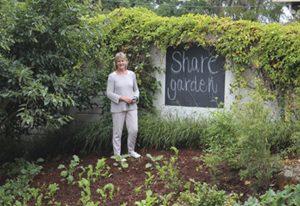 Nicky Kretzman started a share garden on her verge a few years ago after she read about it in a gardening magazine. She is a keen gardener and grew up eating veggies from her mother’s garden. Her motive is purely altruistic and her lesson is that one can care for others. ‘There is no need to ask. Just help yourself’ she says. And if that means the monkeys get some too, well she’s happy to share. She would rather support beggars in this way than give them money.The beneficiaries are mostly domestic workers and gardeners but there’s also a man who lives up the road who confesses to having no luck growing rhubarb so she grows it for him. There is a feast of greens, herbs and hardy edge plants there for the picking (lettuce, potatoes, parsley, dhania, gems, paw-paw, granadilla…) and spinach and chillies seem to be a favourite… These are small gestures, making powerful statements. There’s a nobility to growing food and allowing people to share it.

She has access to manure through her husband’s veterinary clients and she composts the soil well. Unless there is a major outbreak of pests, she uses no pesticides or inorganic fertilisers. Nicky gives all credit to her gardener Owen, who is a Malawian, works hard and is most ‘clued up’.

Although this particular verge garden seems to be the talk of the town among us environmentalists, surprisingly, I could find no mention of it in the local media. So I questioned to what extent is this idea catching on? Nicky says the response has been mostly positive. There are the skeptics who say the vegetables will get pinched. But she often gets Mums stopping with their children to just look; she even received touching pictures drawn by some children in her post box which ‘makes it all worth the while’. Although Nicky asks for nothing, she finds seeds popped in her postbox once a month and one of her neighbours who works for a nursery gives her seedlings. A little while back, someone gave her R200 to contribute to her project. A buss load of university students came to have a look too.

Verge planting is a great way of cultivating community and South Africans can be inspired by the example of Wilga Avenue in Sydney where it is truly helping to create community in underutilised streets of spacious verges. Imagine a whole street of Verge Gardens! Edibility in the streets, out the front, encourage people to interact, start living within sight of each other, and get to know their neighbors. Despite the gardens being all shapes and sizes, planted with a variety of produce, it has given the streets’ community a point of focus that everyone can be part of.

Verge gardens can encourage co-operation. Many of the houses in Wilga Ave have re-routed their front downpipes to water their verge gardens, taking it one verge at a time by building swales to direct the water where needed. Swales as used in permaculture, are designed to slow and capture runoff by spreading it horizontally across the landscape (along an elevation contour line), facilitating runoff infiltration into the soil.

But in many Municipal bye-laws across the globe, there are restrictions against sustainability, particularly verge gardening because it can obstruct views, take over pavements, etc. The residents of Wilga Avenue chose the time-honored guerrilla gardening technique of asking for forgiveness rather than permission from their local council. Since they did such a great job, the council got behind the project, and now actively promotes verge gardening where possible.

There are other more tangible benefits. They entered and won a statewide competition called ‘Sustainability Drive’ run by an energy company (for which they made this fantastic video) which enabled them to access free solar panels for each home in the street.

The implications of this sort of project are quite huge, when you think about it – residents talking to each other and sharing resources and knowledge, kids talking and working together on each others gardens… it’s the basics for functional community – the vegetable version of having your cake and eating it too.

I attended an inspiring talk in Durban recently by Charles Eisenstien, Author of Sacred Economics, The Ascent of Humanity and prolific writer of many other essays. He says that because economies’ aren’t growing, we’re beginning to see a rapid concentration of wealth and inequalities, economic depression and a debt-based, interest-bearing money system. People are slowly beginning to recognise that society and the planet can no longer sustain further growth which in GDP terms means ‘the expansion in the realm of monetised goods and services—ultimately coming from the conversion of nature into commodities and the conversion of social relationships into professional services’. He suggests that

The monetisation of life has reached its peak in our time, and is beginning a long and permanent receding (of which economic “recession” is an aspect). Both out of desire and necessity, we are poised at a critical moment of opportunity to reclaim gift culture, and therefore to build true community. The reclamation is part of a larger shift of human consciousness, a larger reunion with nature, earth, each other, and lost parts of ourselves.

Community is woven from gifts. Unlike today’s market system, whose built-in scarcity compels competition in which more for me is less for you, in a gift economy the opposite holds. Because people in a gift culture pass on their surplus rather than accumulating it, your good fortune is my good fortune: more for you is more for me. These are wealth circulates, gravitating toward the greatest need. In a gift community, people know that their gifts will eventually come back to them, albeit often in a new form.

Although we have done grievous damage to earth, vast wealth still remains. There is still richness in the soil, water, cultures and biomes of this planet. any gifts we give contribute to another kind of common wealth – a reservoir of gratitude that will see us through times of turmoil, when the conventions and stories that hold civic society together fall apart. Gifts inspire gratitude, and generosity is infectious. When I witness generosity, I want to be generous too. In the coming times, we will need the generosity, the selflessness, and the magnanimity of many people. If everyone seeks merely their own survival, then there is no hope for a new kind of civilization. We need each others’ gifts as we need each others’ generosity to invite us into the realm of the gift ourselves. In contrast to the age of money where we can pay for anything and need no gifts, soon it will be abundantly clear: we need each other.’

With Christmas just around the corner let us ponder this and hopefully soon there will be a shift in consciousness where we will start to see more verge gardens cropping up, produce exchange systems initiated, people being well-supported and embracing community rather than self-sufficiency.