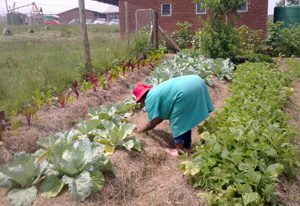 Food Security is a hot topic in South Africa. Millions of people in Africa’s largest economy go hungry each day. But it need not be like this. Why can’t we all simply dig up a bit of lawn, and plant our own veggies? Turn off the TV for an hour, get into the sunlight, and get ready for spring and summer!!

I just found this fantastic article on www.naturalnews.com ! That was after discovering that some city officials are enforcing a no-vegetable growing policy in front gardens in Canada and the US[1]. How unbelievably bizarre?!

During World Wars I and II, private citizens were encouraged to plant Victory gardens in an effort to support the war effort and take the strain off the food industry, providing more food for citizens living at home. Little gardens popped up all over the country and they were called Victory gardens because people envisioned a victorious end to strife, sadness and hardship. Victory gardens in the U.S. produced a staggering 40% of the food supply. The Victory garden campaign resulted in 5 million gardens tended by over 20 million Americans, providing over $1.2 billion in food by the end of WWII.

Victory gardens were planted on every available plot of land — whether postage-stamp sized or covering several acres. The gardening campaign took the country by storm, with people being empowered by raising their own fresh, organic (because there wasn’t anything else back then) fruits and vegetables; coupled with the hope of victory over adversity and better times to come.

The war on food security we fight daily here in South Africa is a real indictment on the ability of every one of us to feed ourselves. We have become reliant on supermarkets, large corporate and major multi-nationals. We don’t harvest our own seeds, make our own fertilisers (formerly known as good old compost), and have become convinced that micro-waved TV dinners and fast-food are good for us. Why is it that every major city in the world has a Leukaemia ward for children? What are we feeding ourselves?

Recently, a renewed interest in creating organic home vegetable gardens has arisen in the U.S., especially with the advent of genetically modified (GM) seeds and foods taking over shelves in grocery stores across the country. Gardens of all kinds are sprouting and flourishing in containers, on backyard fences, on decks, pallets and even in the earth. Many of the new gardens are being grown with organic, heirloom seeds to avoid the suspicious pitfalls of GM seeds. Creative methods of watering and fertilizing complement new garden ideas.

What’s all the excitement about? The concept of victory over adversity in an economy that has broken millions of citizens and torn apart age-old communities still straining with the burden of war has again reared its hopeful head from under the trash heap of discarded junk food and processed packages of chemicals and crap.

Isn’t that what we are facing here in South Africa, in our own cities of Pietermaritzburg, Durban, Cape Town, Joburg? Aren’t we being torn apart by graft, corruption, poverty and inequality?

Backyard gardens promise natural foods that fortify and nurture the body and the earth; along with the freedom to choose what to plant and what to eat — offering a new version of an old way of living.

It doesn’t take much to plant seeds in your garden. It’s your right to choose what you put on your dining table and in your mouth, Plant a Victory garden and occupy your vegetable patch with earthly delights — big or small. Add real fruits and vegetables to your diet and put health back into your life.

African Conservation Trust has a vision of a million gardeners growing vegetables for themselves and their communities, linked into a database webcloud so that markets can have data on the supply. The GIGIBITE GARDENS PROJECT. More to follow…

Mar 6, 2018
We use cookies on our website to give you the most relevant experience by remembering your preferences and repeat visits. By clicking “Accept All”, you consent to the use of ALL the cookies. However, you may visit "Cookie Settings" to provide a controlled consent.
Cookie SettingsAccept All
Manage consent