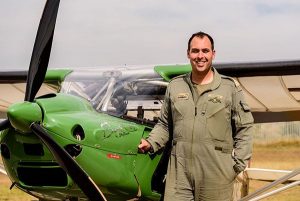 “The bigger the plane, the further away from home you’ll be flying,” pilot Etienne Gerber was told. This resulted in the young family man’s affection for small bush planes and helicopters which he flies from his home town of Hluhluwe, protecting the region’s vulnerable rhino population with passion and purpose.

Etienne’s plane of choice is a BushCat, a locally produced light aeroplane constructed primarily of canvas stretched tightly and zipped over a metal pipe framework. The wide rubber tyres are perfectly designed for bumpy landings on the rough, grassy runway at Hluhluwe Airfield, main base of the Zululand Anti-Poaching Wing. From here Etienne flies daily surveillance patrols and provides reaction response for 25 game reserves in Northern KwaZulu Natal, South Africa.

He responded to a callout earlier this morning involving a lone potential poacher who breached a game reserve boundary, wearing plastic bags over his shoes to cover his tracks. After 3 landings to investigate bore no sign of the suspect, the helicopter is parked in the hangar and the written report is filed. Etienne begins preparations for his daily patrol in the fixed wing BushCat. The young pilot is aware of the 80% unemployment rate in areas that he is flying over and lucrative rhino poaching income often proves overwhelmingly tempting for poverty stricken individuals in communities bordering game reserves.

A team of poachers is typically comprised of 3 to 5 individuals including a guide, spotter, trigger man and the person who removes the horn from the wounded animal. Rhino horn can be sold for up to 60 000 American dollars per kilogram and each member of the group is well rewarded for their part in the crime. Although the 2017 poaching statistics are alarming, Etienne is convinced that the co-ordinated efforts of Project Rhino and the ZAP-Wing Unit are making a difference in the fight for rhino survival.

With the help of foreman Jabulani, Etienne pushes his reliable 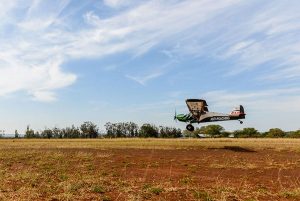 BushCat out through the metal hangar doors onto the sunny cement apron. The dark-haired pilot, who stands taller than the wing, circles the plane completing the pre-flight checks. His olive green flight suit is uncomfortable in the heat of the African winter but is a necessity since it is made of fire retardant fabric and holds his personal transponder in the pocket above his ankle, along with other equipment required for the flight.

Etienne folds his long legs into the cramped cockpit and pulls the seatbelt over his shoulders, securing it carefully knowing that there are no doors on the BushCat. An IPod is attached to the dashboard in amongst the circular dials and instruments and a water bottle is stored away as he settles himself in for 3 hours of flight time, observing activity on the ground far below his feet. The visible aeroplane patrols inhibit poacher movement and any suspicious activities or observations are relayed to the relevant reserve’s security personnel and to Operation Rhino 8, a designated SAPS rhino security task team which works closely with ZAP-Wing and Project Rhino. 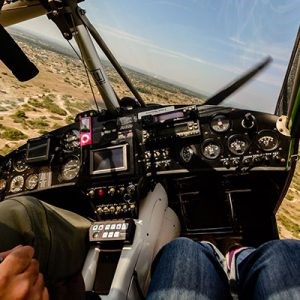 Passion for conservation flows in Etienne’s blood. He was a 3 day old baby when he was brought home to Makhamisa Outpost, a camp in the southernmost point of iMfolozi Game Reserve where his father was stationed at the time. His recently retired father has been a career Game Ranger and APU Manager with 42 years of service to KZN Wildlife and the Gerber family has lived predominantly in Zululand wildlife reserves with conservation being the focus of daily life and routine.

Etienne says,” I always knew that I wanted to fly.” After finishing matric, he completed his fixed wing commercial pilot’s licence at 43 Air School in Port Alfred in 2003 subsequently banking valuable flying hours as a fire spotter over forestry plantations. Thereafter a period of glider tug piloting in Bloemfontein led into happy years working with a flying doctor service into the Lebombo Mountains for ZUMAT (Zululand Missionary Ambulance Transport). In 2012 Etienne joined the ZAP-Wing Unit based in Hluhluwe, where he lives with his wife and young children.

“My dad taught me that there’s a huge difference between quality of life and standard of living,” says Etienne. This dedicated pilot who feels that his work is a calling is certainly living a life of quality and ACT couldn’t be prouder to be associated with Etienne and the ZAP-Wing Unit.