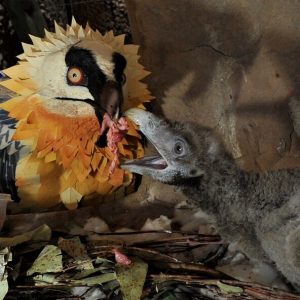 Although Shannon Hoffman is a passionate puppeteer, she doesn’t perform on a stage.

Shannon uses her African bearded vulture puppet to feed the two chicks she is rearing. This experienced conservationist, who is a long standing custodian and protector of African birds of prey, knows that puppet-raising prevents the chick imprinting on humans and improves the possibility of the fully grown bird successfully reintegrating into the wild. She says, “Feeding the chicks is quite mechanical in the beginning. They eat because they are hungry. Once we had this new puppet I watched those little things start to lean in. They responded so beautifully to it. The only reason you know what you are is because you look at what is feeding you. Then you go oh I’m one of those.” Shannon’s puppet was hand-crafted by Spanish artist, Paco Ventura, and looks incredibly like a mature Bearded Vulture. 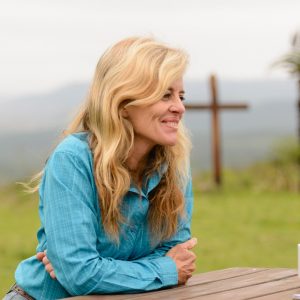 frican bearded vulture population is critically endangered as only 400 are estimated to remain in their natural habitat. Harvesting eggs to rear in captivity is a physically dangerous and logistically challenging endeavour. The birds build their nests on rocky outcrops and ledges on remote cliff faces of the Drakensberg Mountains. During July and August the helicopter hovers in front of a potential nest to visually line up a mountain climber so that he may successfully abseil down to the nest platform. Once there he needs to measure and weigh each egg so the smallest can be removed and carefully placed into a temperature controlled flask (37.5 degrees Celsius). This species of birds practices siblicide meaning that the chick which hatches first will kill its siblings. The theory is that the second egg can be ethically taken to be puppet- reared as the chick would die if left in the nest. The flask is stored away, the climber ascends and the first step in a complicated process is completed. 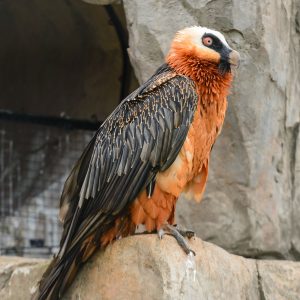 The egg harvesting procedure is dangerous indeed and Shannon has risked her own life on more than one occasion. During a stormy harvesting season, the helicopter that she and her team were travelling in crashed on a mountain top in the snow. Fortunately there were no injuries or loss of life but nevertheless, the stakes are high for Shannon and for her vultures. Shannon and her dedicated team are standing steadfastly between the bearded vultures and extinction.

ACT has recently partnered with the African Raptor Trust to build a fabulous education centre, with funding from the National Lotteries Commission, and we are proud to be involved with this hardworking and dedicated conservationist.

Jan 17, 2019
We use cookies on our website to give you the most relevant experience by remembering your preferences and repeat visits. By clicking “Accept All”, you consent to the use of ALL the cookies. However, you may visit "Cookie Settings" to provide a controlled consent.
Cookie SettingsAccept All
Manage consent