The African Conservation Trust’s Heritage Unit has recently returned from a 15 day fieldwork mission to the Kruger National Park. This was the culmination of 5 years preparation that began when Carl Grossmann, ACT Chairman, was conducting research into an ancient dhow anchorage on the River Save in Zimbabwe. He came across a 1905 sketch map of the stonewall ruins in Zimbabwe. Also indicated on this map were three ruin sites that were indicated to fall in South Africa and in particular in the Kruger National Park.

The ACT Geographical Information Systems (GIS) team began a series of best fit geo-referencing attempts of the sketch map. We had firsthand knowledge of the Thulamela Ruins in the north of the park and we had heard of the Makahane Ruins further to the western boundary of the park. We assumed that at least one of the sites indicated on the map were the Thulamela Ruins. The Kruger National park has been occupied to various degrees by humans since the earliest of the Stone Age, through the Iron Age until present day. We were interested in the Iron Age settlements in the park and obtained a dataset from SANParks indicating known sites. There were two areas clearly devoid of any known settlements and these areas became the focus of our attention. GIS modelling of the known sites determined some key criteria and these were then applied to the areas of interest. The modelling delivered 9 potential sites of interest and possible settlement. 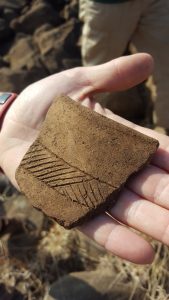 The team managed to investigate 6 of the sites on foot during the fieldwork period. Of those, 3 Iron Age settlement sites were found which included remnants of stonewalling, ceramics and stone tools. Items were photographed and experts are resolving the information from diagnostic markings on the ceramics. The team is very excited about one piece in particular that may lead to a far greater investigation and even excavations of the one site.

Returning full circle back to that sketch map from 1905. If two of the sites indicated are indeed Thulamela and Makahane then there still remains a third extensive stonewall settlement to be discovered !!

Jul 14, 2017
We use cookies on our website to give you the most relevant experience by remembering your preferences and repeat visits. By clicking “Accept All”, you consent to the use of ALL the cookies. However, you may visit "Cookie Settings" to provide a controlled consent.
Cookie SettingsAccept All
Manage consent